The moment had come for Leigh Hassler (Arch ’00) to remove a painstakingly constructed steam chamber created for one of the ornate Carrara marble capitals that adorn the University of Virginia’s Pavilion VIII. During the building’s original construction, Thomas Jefferson ordered these capitals from Carrara, Italy—the same source as the recently replaced capitals that front the Rotunda. She and her team were six hours into an intense paint removal process. A palpable sense of anticipation hung in the air.

As the team got down to business, briskly removing the chamber’s box around the capital, steam rose into a crisp, blue fall sky.

While Hassler and her colleagues Lee Dunsmore and Andrew Fearon of Philadelphia-based Materials Conservation are well-versed in a myriad of historic preservation projects—they once moved and restored a 15-foot wall mural painted by famed author Maurice Sendak— UVA’s capital restoration was a special project. The team was tasked to create and build a custom-fitting steam chamber to remove decades of old paint from the Pavilion VIII capitals. The process works by using the steam to suffuse tiny cracks between paint layers and provide a barrier against the marble as the team gently peels them away.

Even for these consummate professionals, the unknown is always a factor when dealing with historic preservation and restoration. According to Hassler, in this instance, the biggest challenge was to remove the paint without harming the marble underneath.

Good news: The steam was successful, softening up multiple layers of paint for removal before it all began to dry again. Hassler compared it to using a slow cooker: “If you steam it or cook it long enough, the meat, or in this instance the paint, should just fall off the bone.”

This is really where it all began for me, in terms of my interest in architecture, conservation, and architectural history. I'm just thrilled to be able to play a small role in the restoration efforts here, whenever they need us.
Leigh Hassler (Arch '00)

After peeling away large swaths of the most pliable layers of paint, the team worked quickly, using dental tools and micro-spatulas to scrape off the rest. After four days of scraping, chipping, and applying multiple applications of a neutral pH paint stripper to remove the oldest layers, the team restored the capital to its original form.

Jefferson based the design for these capitals on the Corinthian Order of the Baths of Diocletian, but he never intended for them to be painted. “We aren’t sure exactly when or why they were painted,” said James Zehmer (Arch ‘02), one of UVA’s historic preservation project managers, “but we speculate it was to cover up soiling and staining from atmospheric pollutants of the 19th and early 20th centuries.”

Hassler considers the exacting work needed to restore these 200-year-old capitals to their original state to be a small price to pay for the opportunity to work on the Academical Village. “This is really where it all began for me, in terms of my interest in architectural history, architecture, and conservation,” she said. “I'm just thrilled to be able to play a small role in the restoration efforts here, whenever they need us. I support this effort and I hope everyone else does, too.”

Since graduating from the School of Architecture, Hassler has participated in several historic restoration projects at UVA. In 2008, she helped with laser cleaning the column capitals on Pavilion II, subsequently working on the Rotunda capitals survey and projects focused on Pavilion III, Cabell Hall, and Clark Hall. 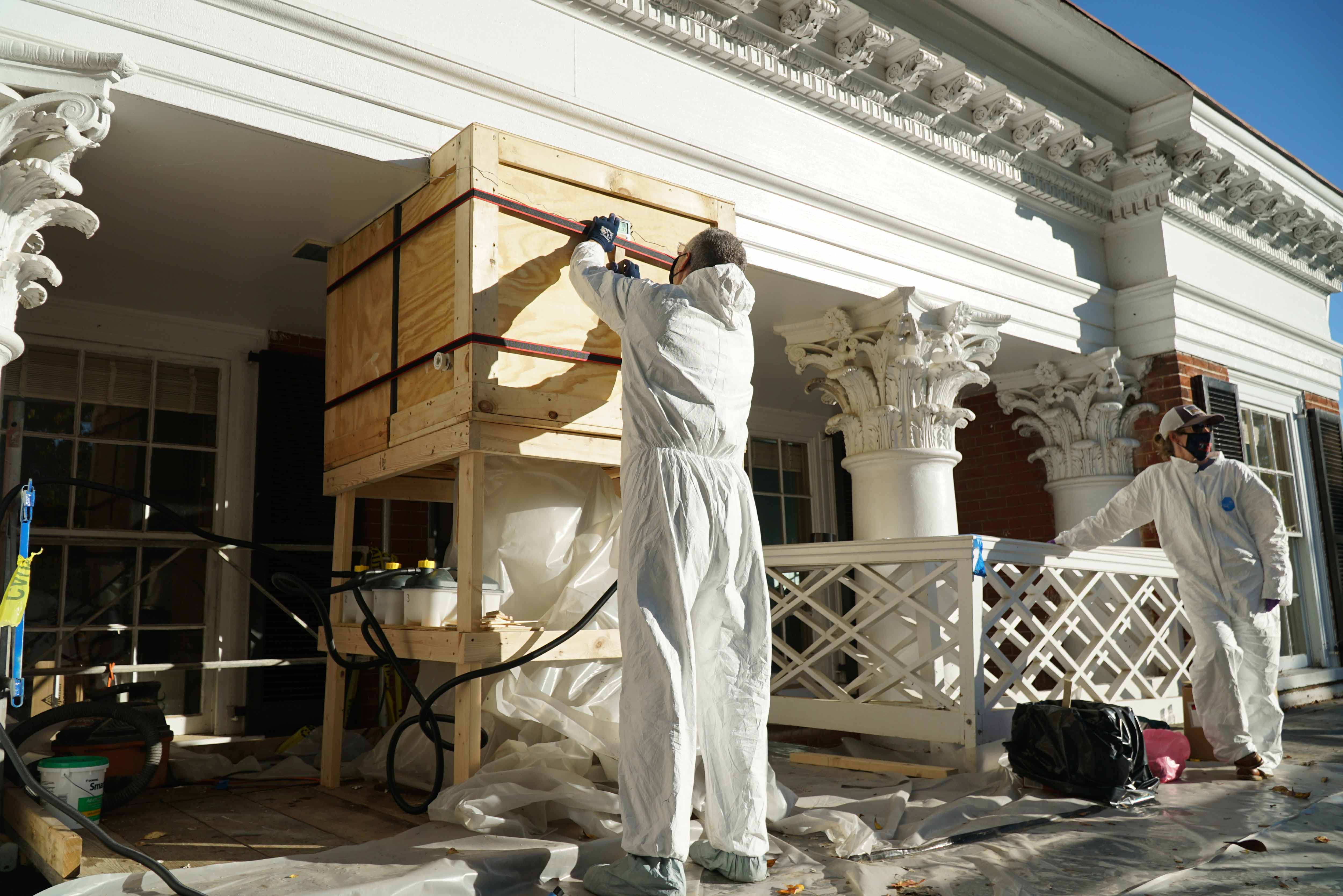 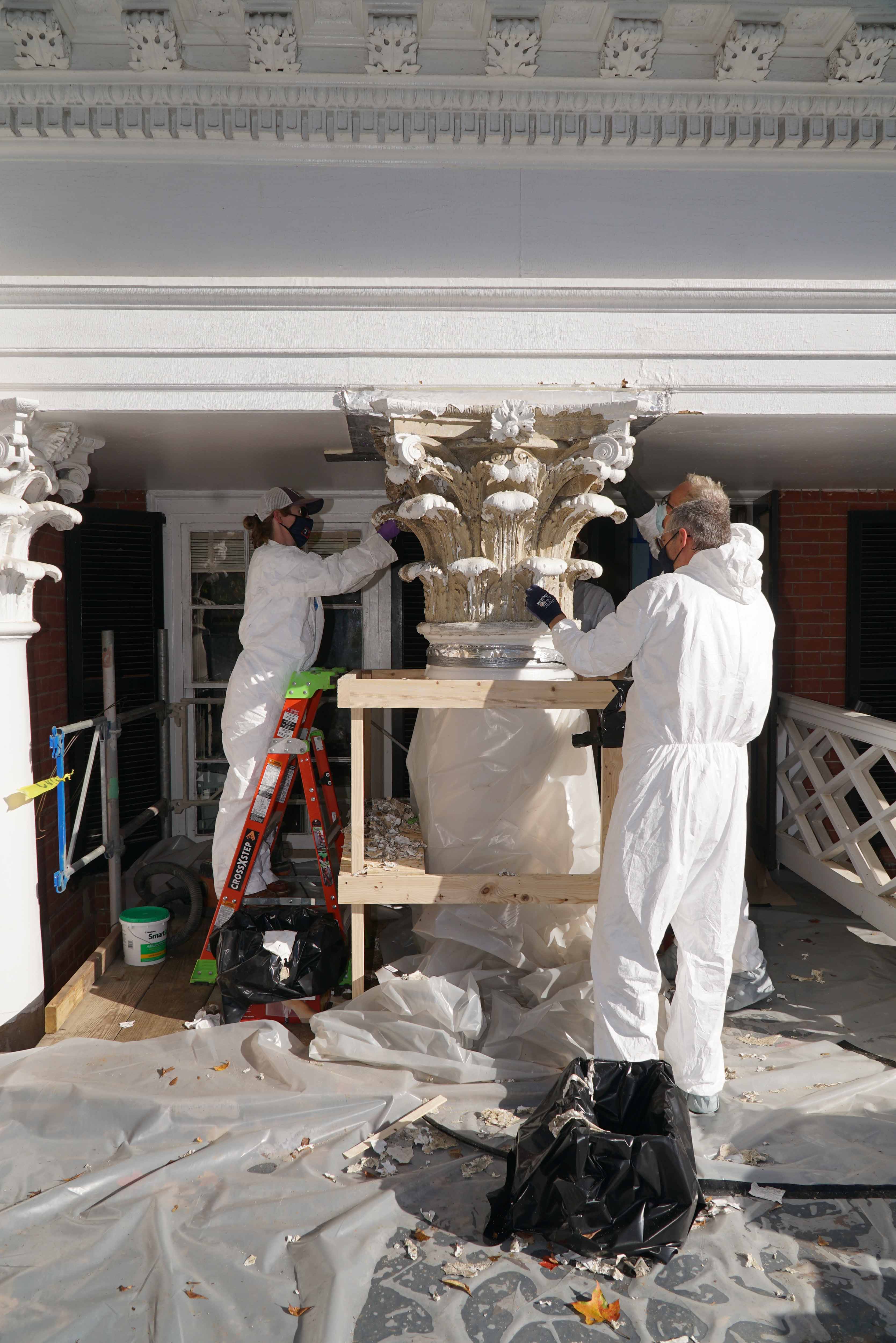 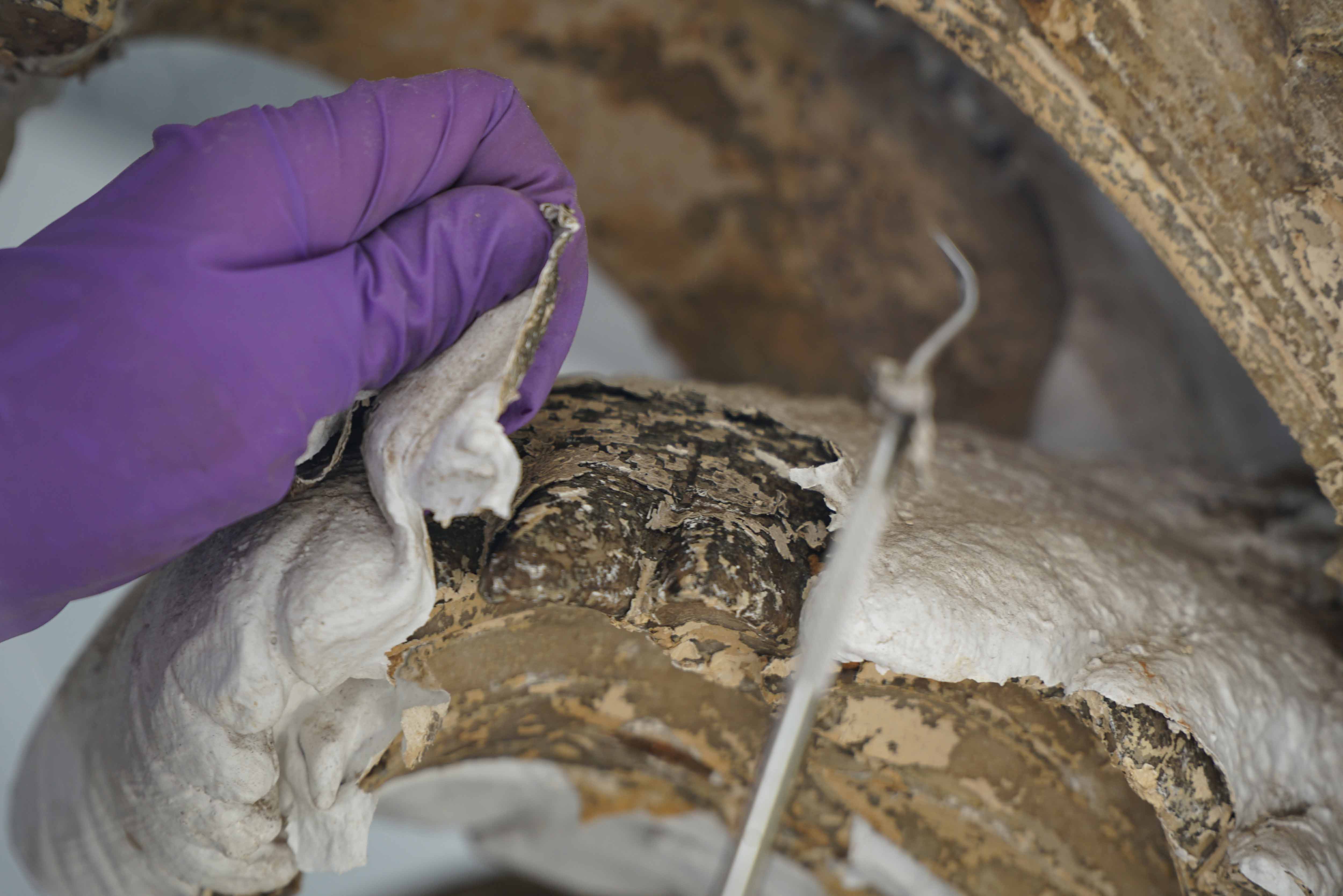 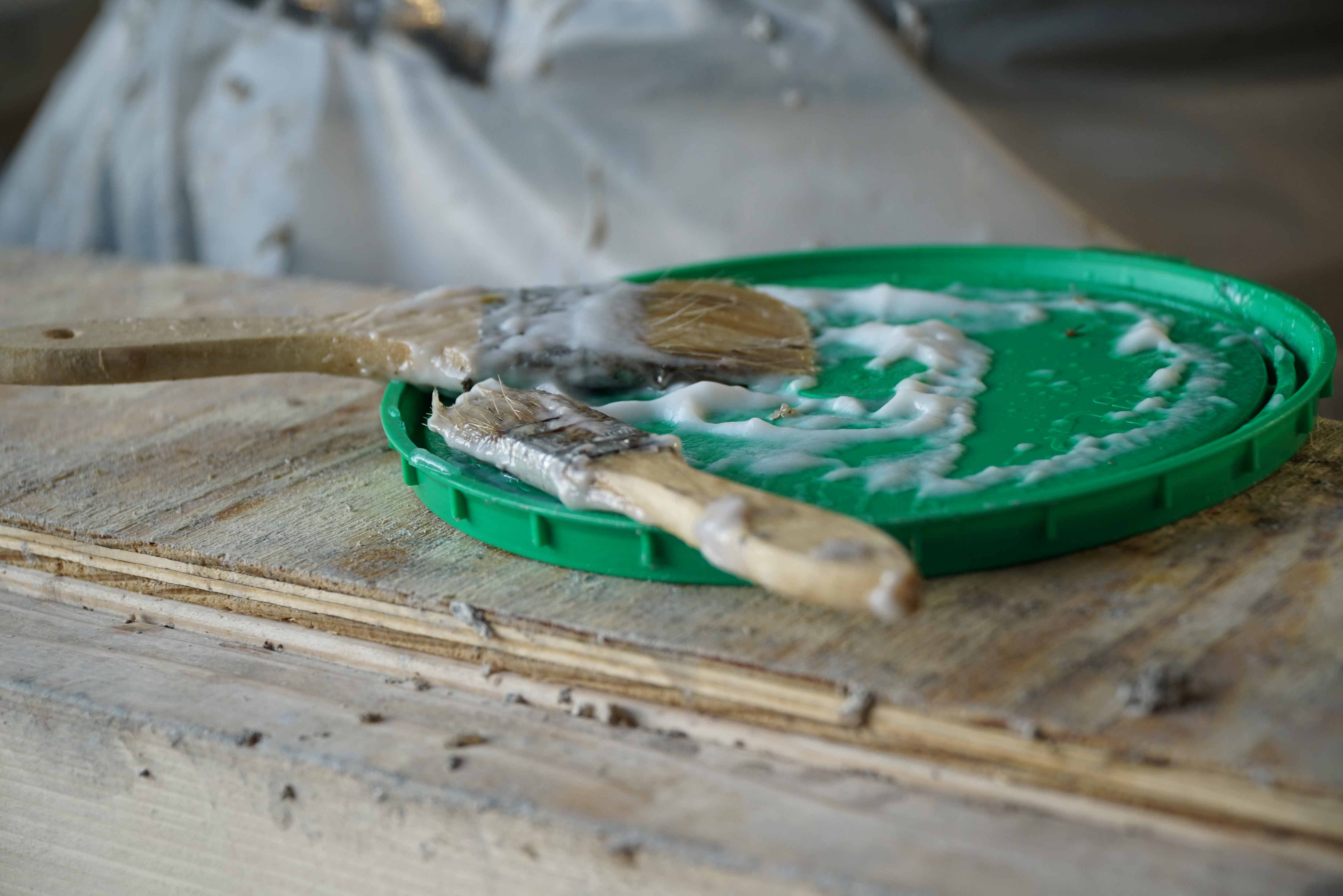 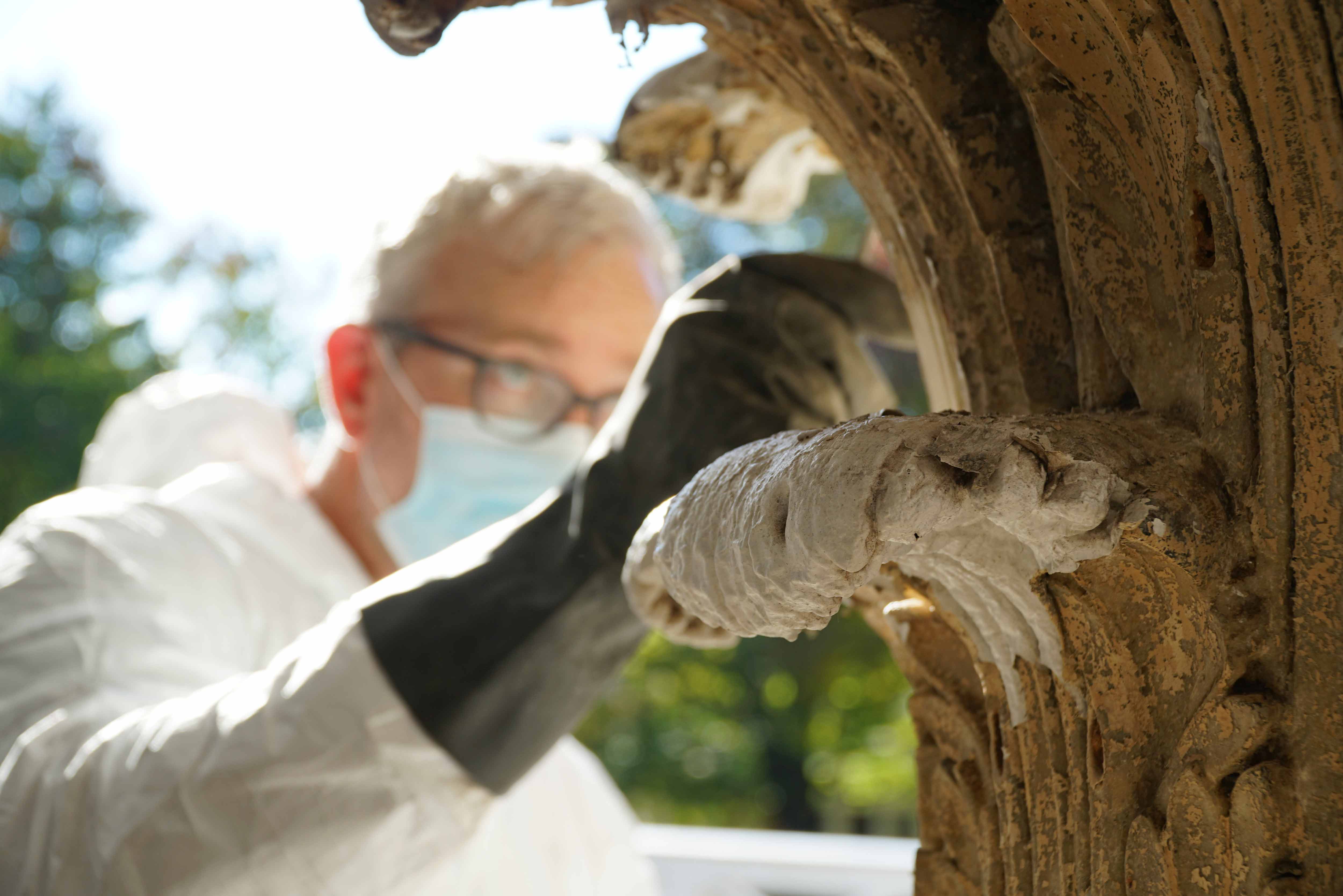 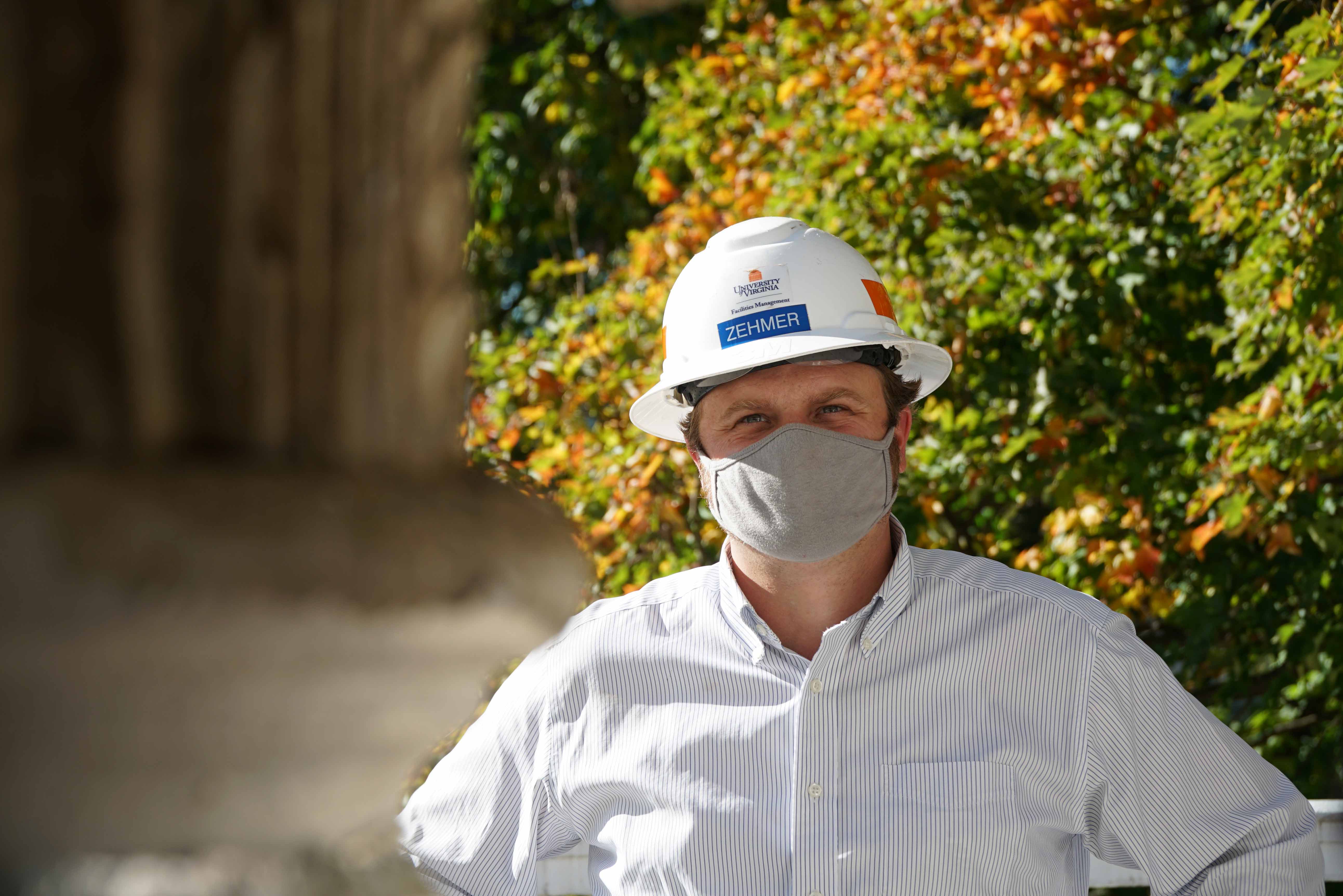 Hassler combines her love for UVA with an abiding respect for the architecture of the Academical Village. As a professional conservator, she finds it inspiring that countless people can connect to the site on many different levels.

“The thing that strikes me the most about Jefferson’s design is not only is it a UNESCO World Heritage Site, but it is a UNESCO site that has maintained its functional integrity. It is still functioning as originally intended, which is really rare,” she said. “The energy that goes into making that happen is remarkable and it's a testament to the staff here. I really consider it to be one of the most significant sites in the country.”

Hassler and her team plan to return to work on Pavilion VIII’s three remaining capitals next spring. She’s proud of the steam removal process her team has developed, but hopes it never has to be repeated. Her professional advice? “Never paint Carrara marble. It won’t happen again.”

It is no exaggeration to say that constant wear and tear is hard on 200-year-old buildings. Repairs are always needed to secure the structural integrity of an Academical Village of students and faculty who continue daily use of the Lawn and Range. Overall restoration is being led by John G. Waite, Architects, and UVA’s in-house Construction and Renovations Department is performing most of the work.

The University is grateful for the many supporters who have already contributed to this effort to restore, with a special thanks to the estate of John E. DeLashmutt Jr. (Col '69, Ed '73), Michelle Lucas and Brad Lucas (Col ’97), Joan Houck and William Houck Jr. (Col ’65, Med ’68), and Shannon Houck and William Houck III (Col ’93). UVA continues to seek support for Pavilion VIII’s current restoration work as well as ongoing preservation needs through the Historic Buildings and Grounds Fund and the Jeffersonian Restoration Endowment. 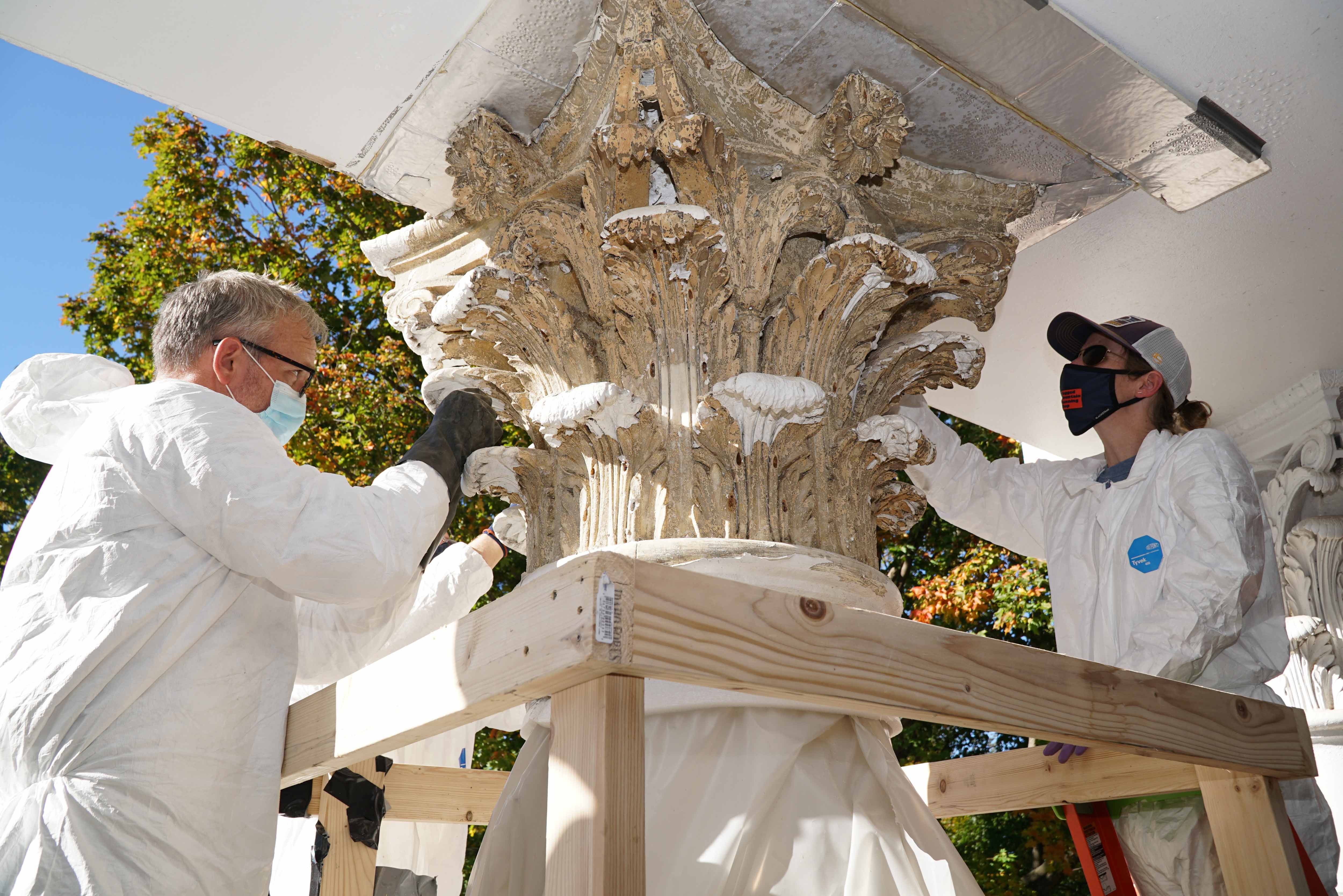