The Vice President for Advancement supports the University’s fourfold mission of teaching, research, health care, and public service by fundraising for pan-University strategic priorities and providing resources and expertise to the University’s advancement community.

University Advancement is part of UVA’s greater advancement community, serving as a partner with the schools and units as well as the many volunteers who are committed to UVA’s success.

Mark Luellen was appointed vice president for advancement at the University of Virginia in May 2016. Charged with oversight of the advancement operation, he provides leadership for advancement programs and initiatives across the University, and is responsible for planning and directing the University’s comprehensive, $5 billion dollar philanthropic campaign – Honor the Future – launching in 2019. Luellen works with University, school, and foundation leadership to identify campaign priorities and define fundraising strategies that support the University's mission of teaching, research, clinical care, and public service. He currently serves as the president’s representative on numerous leadership boards, including various University-associated organizations (Architecture, Education, Health, Commerce, and Athletics), and sits on the board of the UVA Foundation.

Luellen previously served as associate vice president for development at UVA. In this role, he led the University’s central development efforts, managing a team of nearly 80 development officers and staff, and played a lead role in planning for the current campaign. He came to the University of Virginia in May 2014 from The Pennsylvania State University, where he first served as associate director of development for the College of Liberal Arts, then as director of major gifts, and finally as director of alumni relations, communications, and development for the College of the Liberal Arts. In that role, he led the College at Penn State to the successful completion of its $113 million campaign – surpassing the goal nine months ahead of the campaign close.

In 2014, Luellen received the McKay Donkin Award, given annually to the full-time member of the faculty, staff, or the retiree of the university who has made significant contributions to the “economic, physical, mental, or social welfare of the faculty” of Penn State. He and his Penn State advancement team were presented with the 2014 Outstanding Teamwork Award in the College of the Liberal Arts. Prior to Penn State, Luellen served in various leadership roles for Affinity Connection, which provides alumni relations and major fundraising services to university-based affinity groups and volunteer-driven organizations on more than 60 college campuses in the U.S., Australia, and New Zealand.

Luellen has been actively engaged in community and volunteer organizations. He served on the Allegheny College Alumni Council and has been a volunteer or committee member for various community organizations including the Pennsylvania Pink Zone, the YMCA’s Strong Kids Campaign, and the American Cancer Society’s Relay for Life effort. He served as vice chair of the 2018 MS Society Dinner of Champions, of which UVA President Teresa Sullivan was honoree.

Luellen received his bachelor’s degree in English, with a minor in elementary education, from Allegheny College. At Penn State he received a graduate certificate in project management. He and his wife, Beth Ann, and their two daughters reside in Ruckersville, Virginia. 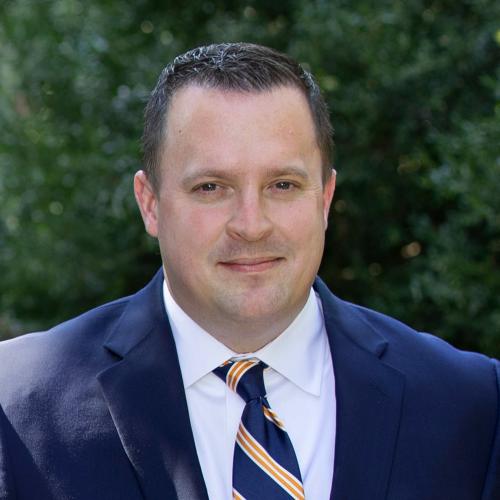