When Andrew Selfridge (Col ’71, Ed ’72) was preparing to retire from a 26-year career as a director of development for the University of Virginia, he relocated to Florida. When faced with cancer, he chose to come to Charlottesville to spend his last days.

In many ways, UVA was home for Selfridge. He attended the University on a football scholarship. He was a four-year starter, co-captain, and made 1st Team All-ACC in 1971.  Selfridge was selected to live on the Lawn at 30 East Lawn and was a member of the Delta Kappa Epsilon fraternity.

Selfridge’s career in the National Football League—including five seasons at linebacker and on special teams for the Buffalo Bills, New York Giants, and Miami Dolphins—began in 1972 when he was drafted in the 13th round by the San Diego Chargers. In April 2019, he was awarded the “Crossed Sabres” award from the Football Alumni Club in recognition of the extraordinary impact he had on the UVA football program.

Barry Parkhill—currently the University's associate director of athletics for development—was working as a regional development officer when he got a call from Selfridge, whom he had known when they were undergraduates together. Selfridge had retired from the NFL and was interested in making a career change. He joined UVA’s development staff and moved into Parkhill’s neighborhood. "I had known Andy, but he became family. That's the best way I can describe it. He was part of our family and I loved him like a brother."

Andy considered his work at UVA as a service. He was a wonderful ambassador for the University.
Adam Fentress

Selfridge was a relationship-builder. He was trusted by the many UVA donors and volunteer leaders with whom he worked on their philanthropy and service, and by the colleagues he mentored over the years. Ryan Emanuel, who now works in the Office of the Vice President for Advancement, recalled gratefully, “Andy gave me my first advancement job almost 15 years ago. I started learning from him on day one and kept learning until the last time we spoke in the spring of 2019. Most of what I know about UVA lore and culture and about how to develop meaningful relationships with donors came from Andy. He also taught me that our jobs were about serving something bigger than ourselves, and that’s always stuck with me.”

"Andy considered his work at UVA as a service. He was a wonderful ambassador for the University," said Adam Fentress, director of major gifts. Selfridge worked with alumni and friends in the Birmingham area and helped Fentress make connections there. A group of Birmingham alumni—led by Dr. Ken Botsford (Col ’75, Med ’79) and including John Harbert (Col ’11), Bill Jones (Col ’72), and Lee Thuston (Col ’71)—had been working to gather support for a combined $1 million gift to the Bicentennial Scholars Fund. Selfridge helped Fentress and Botsford identify others in the area who would be excited by the opportunity to create a Birmingham Bicentennial Scholarship and receive the dollar-for-dollar match from the University.

He also taught me that our jobs were about serving something bigger than ourselves.
Ryan Emanuel

"Andy was so warm," said Botsford. "He got to know people, and truly befriended them. And then would make you aware of things that might pique your interest. He really became a friend to everybody—a friend who happened to work at Virginia." Botsford, vice chair for the Honor the Future Campaign Executive Committee, was visiting Charlottesville when he learned that Selfridge was in hospice care. He was able to see his friend one last time. Selfridge died that night. "I knew the right thing to do was to name the scholarship in Andy's honor. He was just so dear to all of us," Botsford remembers. "From Charlottesville, I called Lee, Bill, and John, and they agreed."

Botsford and the others were determined to reach their $1 million goal. "Andy's death gave those of us who had started with the idea even more commitment and passion. We knew we were going to do this, no matter what, in the name of Andy." A number of other Birmingham area alumni gave generously, and Botsford and his wife Nina Botsford made an additional commitment to take the total pledged to over $1 million.

When he learned that they had received enough gifts for the match, Parkhill was the first person Botsford called.

Recipients of the Andrew P. Selfridge Bicentennial Scholarship won't be the only students on Grounds who benefit from Selfridge's legacy. Knowing firsthand how cold the trips from a Lawn room to the shared facilities could be, Selfridge created an endowed fund to supply bathrobes to the fourth-year students who live there—a fitting legacy for a man who is remembered for his warmth. 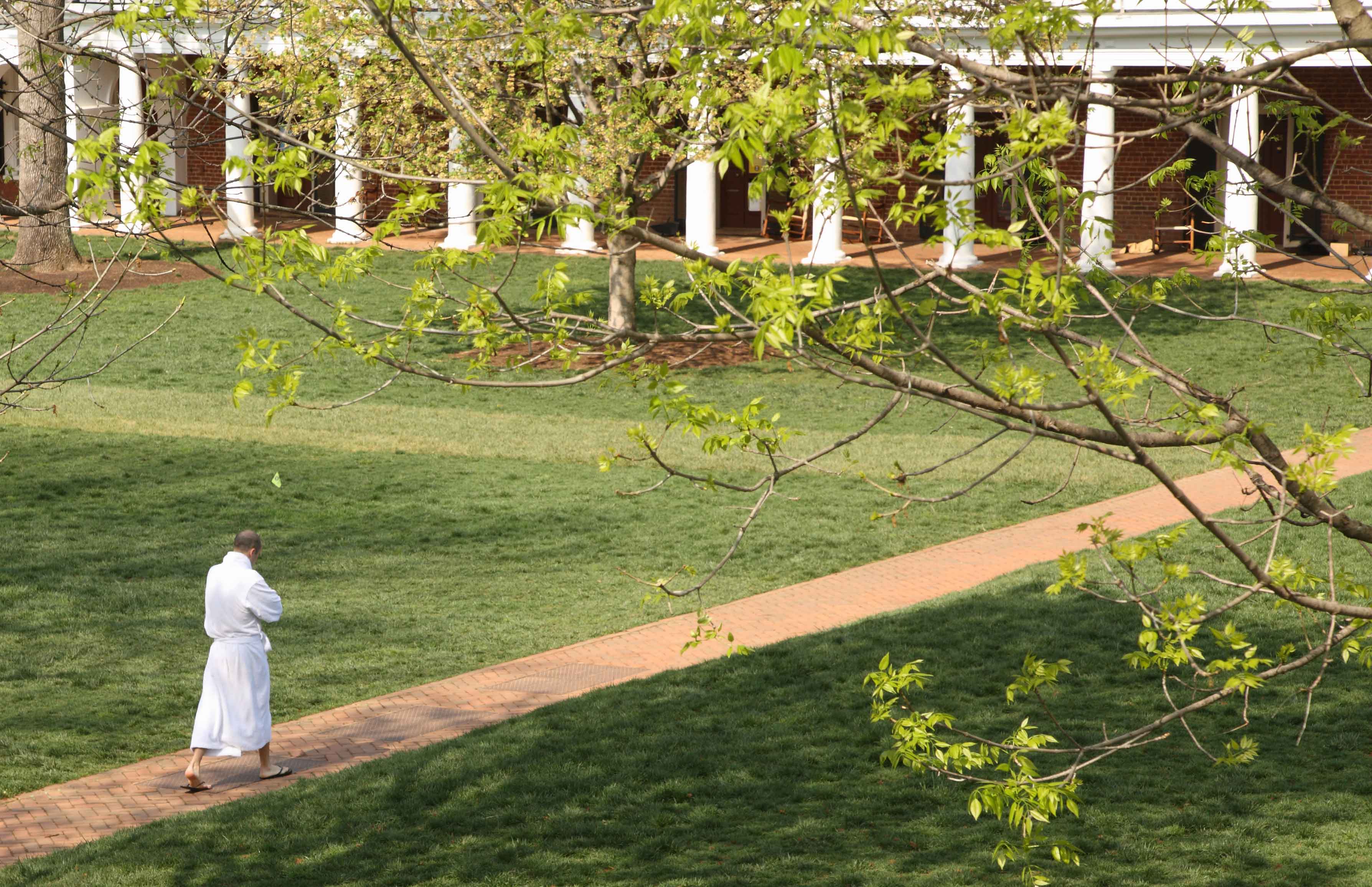