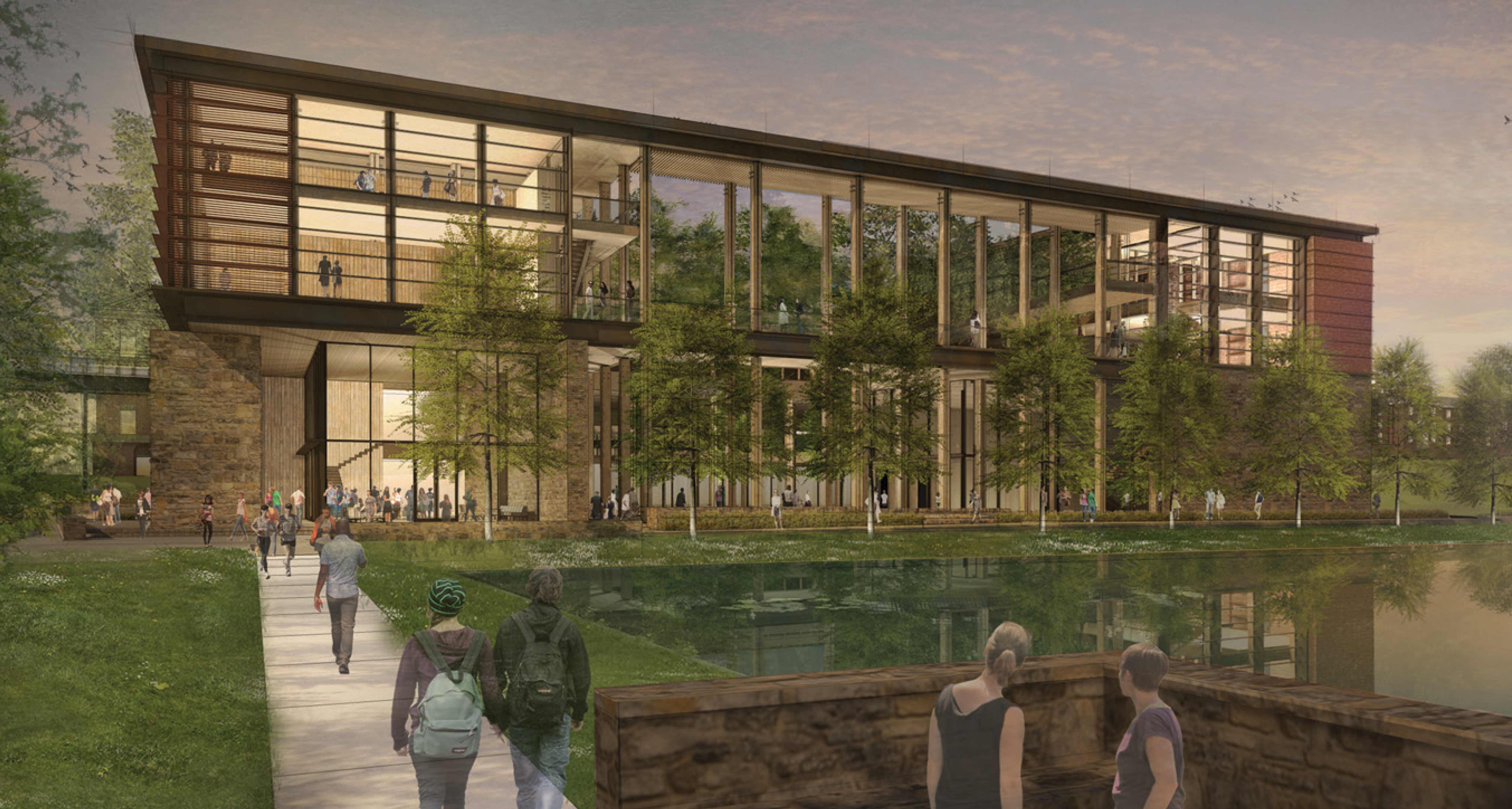 Cloudy skies didn’t dampen the enthusiasm of University of Virginia leaders and guests Friday morning as they celebrated the groundbreaking of the Contemplative Commons in person and gave several standing ovations to the speakers. The ceremony took place on the site of the future interdisciplinary building at the Dell on Emmet Street.

David Germano, executive director of the Contemplative Sciences Center, which will be part of the Commons, began the event with an appropriate gesture – leading a meditation session, with speakers, supporters, faculty, staff and students gathered near the Dell pond.

“While we inhabit [our] sensations, and maintain our awareness of this place and people, let us consider our intentions,” he said. “Young people in times of unprecedented change, complexity and challenges. The renewal of our commitment on Grounds to innovations in the built environment, to designing places that inspire and relax, places that support the flourishing of students, local community, staff and faculty.”

The Dell pond was created in 2004 when Meadow Creek was unearthed from underground pipes as part of a stormwater management project supporting the creation of the John Paul Jones Arena. The creekside site has provided many different uses, with Germano saying Meadow Creek “provided the water of life for the original Academical Village, and its history since then has included being a farmland, a golf course, an ice skating pond and an elaborate 1920s garden,” as well as basketball courts and a parking lot in recent decades.

“We now embark on the transformation of this parking lot and basketball court,” Germano said, “into a landscape and building supporting the flourishing of this human – and more than human – world, and drawing upon the transformative power of the natural and built environment, a core UVA value stemming from the inspired work of its founder, Thomas Jefferson.”

The Dell has been a special place for alumnus Jeffrey C. Walker, who chairs the Contemplative Sciences Center’s advisory board, since he was an undergraduate, he said. It was the first spot where he chose to meditate when he was a student exploring different ideas and experiences. Now meditation is no longer a “strange” activity, and has proven benefits, he said. Walker, former chair and CEO of JPMorgan Chase’s global private equity group, has served on UVA’s Board of Visitors and also has chaired the University’s Council of Foundations.

In addition to Germano and Walker, speakers included UVA President Jim Ryan; UVA Rector Whittington Clement; lead donors Paul Tudor Jones, an alumnus, and Sonia M. Jones, his wife; Bob Pianta, dean of the School of Education and Human Development, which is located right next to the site; and Joy Cuffee, a fourth-year UVA student and co-president of Mind & Body, a student organization. The speakers all touched upon the transformative powers of contemplative practices and skills.

Attendees gathered to honor the purpose of the building: to be a hub for promoting student flourishing in academic, co-curricular and extracurricular activities, interdisciplinary collaboration and research, and Charlottesville community engagement. 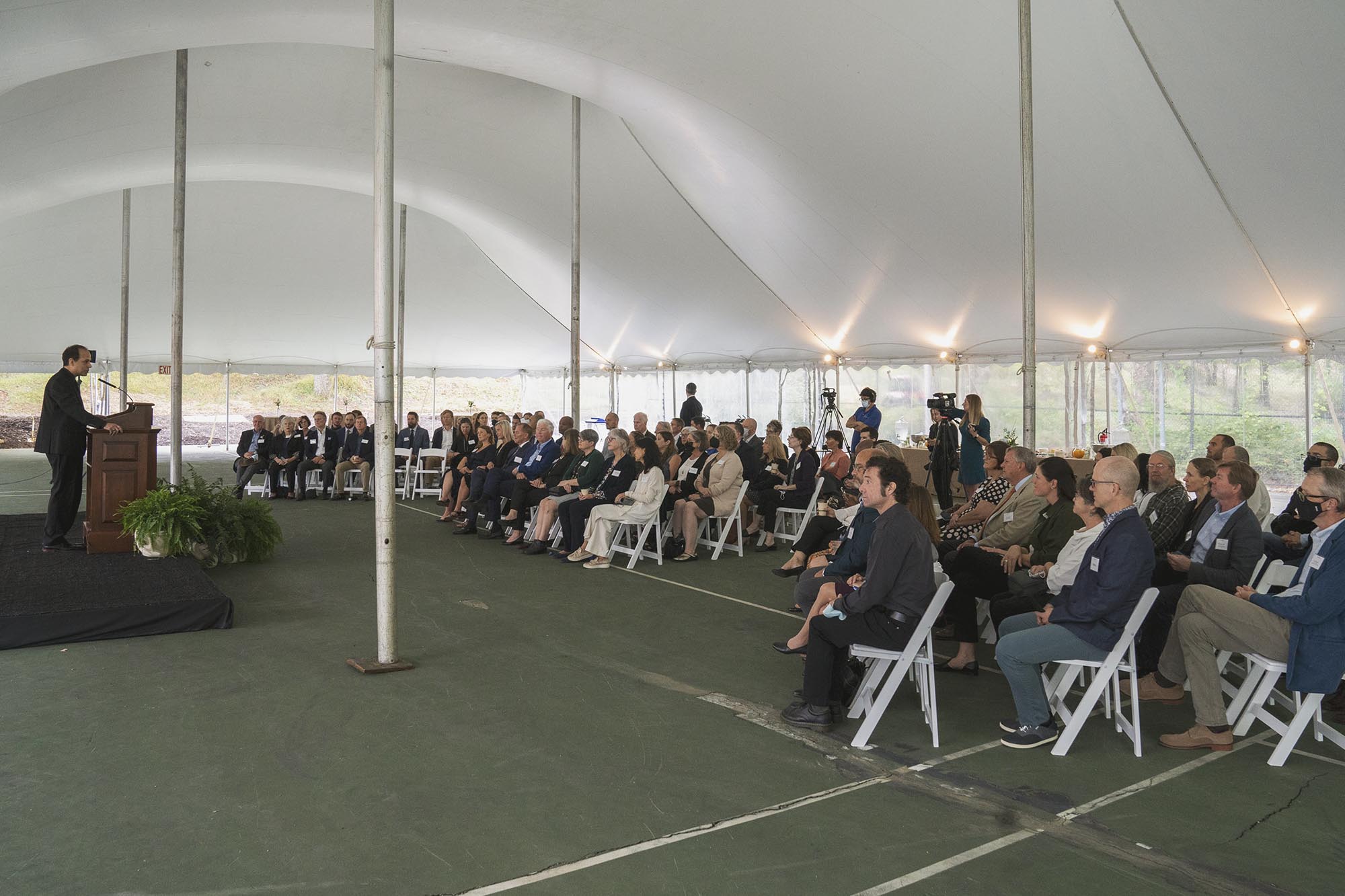 “One of the overarching goals of the 2030 Strategic Plan,” Ryan said, “is to cultivate the most vibrant community in higher education, in order to prepare our students to be servant-leaders in a diverse and globally connected world. … The programming and activities in this building will support our students’ physical, emotional, social and professional needs. In short, it will support student flourishing at UVA.”

When it opens in 2023, the 57,000-square-foot Contemplative Commons will take full advantage of its idyllic location alongside the Dell pond and several new outdoor spaces, including contemplative gardens, a tree-lined courtyard and a new green pedestrian bridge across Emmet Street.

UVA’s Contemplative Sciences Center has worked closely with the Office of the University Architect as well as Aidlin Darling Design, VMDO and Nelson Byrd Woltz Landscape Architects to design the Contemplative Commons as a multipurpose complex accommodating this new model of higher education dedicated to helping students flourish in all aspects of their lives at school and beyond.

“What a deceptively simple question: How does one design a university building to support student flourishing?” Germano asked. “Flourishing – the realization of young people’s fullest potential in body, mind, emotions, relationships, academics, professional preparation, members of communities, and of our unfinished democracy. A meaning-rich life full of purpose, compassion, wisdom, awareness, contentment, diligence, courage. The ability to be resilient in the face of change and stress, the ability to be aware of one’s own emotions and thoughts, to align one’s values and actions.”

The design inside and out includes a variety of flexible learning studios that can be configured for academic classes, quiet reflection, physical activity or social interaction. The building primarily will house academic activities during the day, while on evenings and weekends, it will host extracurricular events, social gatherings and local community engagements.

“The Contemplative Commons will also be a place that showcases innovations in teaching and learning,” Ryan said. “It will support experiential and engaged learning with spaces for movement, contemplation and connection. It will go beyond the traditional lecture hall to include hands-on learning with peers, including interconnected indoor-outdoor spaces that bring nature to the classroom and the classroom to nature. And it will encourage engagement with the broader Charlottesville community by offering space and community programming.” 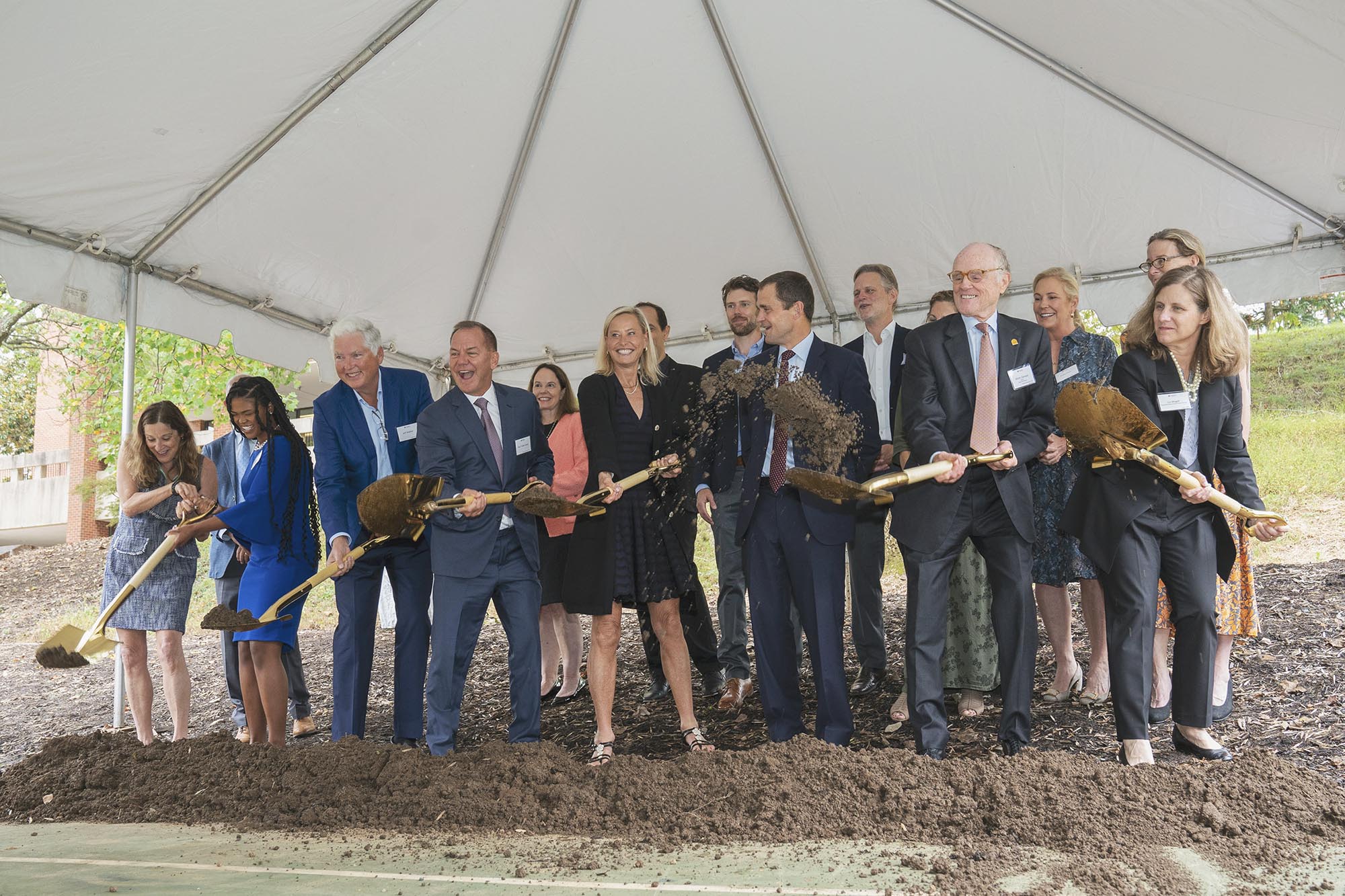 UVA leaders and others took part in the groundbreaking of the Contemplative Commons, an interdisciplinary building whose design aims to cultivate student flourishing. (Photo by Dan Addison, University Communications)

Once complete, the space will encourage collaboration and partnership, as well as a closer integration of the academic experience with personal well-being. Artistic performances, activities like dance and yoga, and networking opportunities will exist alongside teaching and research in an environment that focuses on experiential learning.

The Commons will expand on the work currently being done by UVA’s Contemplative Sciences Center, which was founded in 2012, thanks to the Joneses’ $12 million gift.

The mission of the Contemplative Sciences Center is to advance the study and application of student flourishing at all levels of education that continues throughout adult life, professional and personal. In particular, the center focuses on how educational institutions can better understand and facilitate the types of knowledge, mindsets and practices that promote flourishing.

The Contemplative Commons is funded in part by a $40 million lead gift from Paul and Sonia Jones, along with generous gifts from Walker, additional members of the Contemplative Sciences Center’s Advisory Board, and other donors.