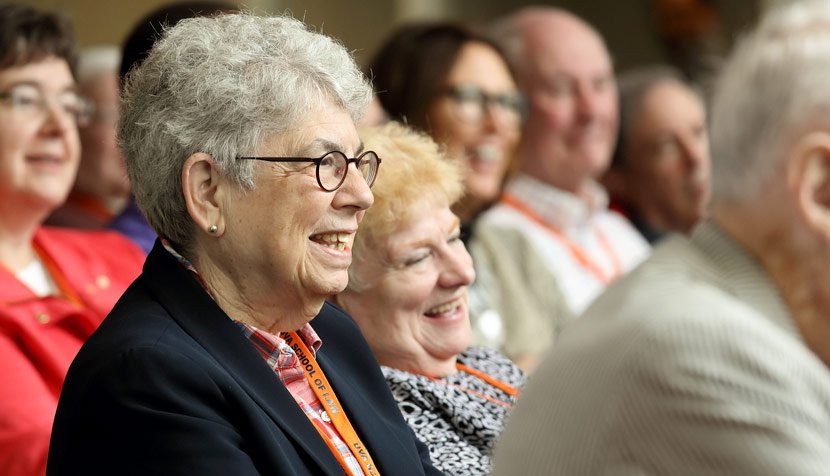 Posted on School of Law | By Jenny Abel

Thanks to the generosity of Nancy L. Buc of the University of Virginia School of Law’s Class of 1969, the first of 20 new Research Professorships in Democracy and Equity will reside at the Law School.

These rotating two- to three-year positions, spanning the Uni­versity’s various schools, will examine the underlying causes that fueled the violent white supremacist demonstrations in Charlottesville and at UVA during Aug. 11-12, 2017.

The professorships were a product of the University’s Deans Working Group, charged with as­sessing the events of Aug. 11-12. Led by Dean Risa Goluboff, the group released a report analyz­ing the University’s response and recommending changes to the school’s policies. Among its rec­ommendations, the group pro­posed that $20 million be allo­cated by the Board of Visitors for the Democracy and Equity pro­fessorships — as dollar-for-dollar matches for donor contributions. Last year, President Jim Ryan ’92 announced the effort had BOV approval.

Buc had already been contemplating the gift of an endowed profes­sorship at the Law School. Angered and saddened about the events of August 2017, Buc said she was inspired by Ryan’s challenge to the UVA community to grapple with the gaps between ideals and reality, both at the University and in the United States. So when Goluboff called her to ask about setting up a Nancy L. Buc ’69 Re­search Professorship in Democracy and Equity, it took Buc “less than five seconds” to say yes, she said.

“I believe that law and the rule of law are central, essential un­derpinnings of our society, and that both are currently threatened,” Buc explained. “This professorship is my way of fighting back.”

She said she was particularly drawn to the linkage of democ­racy and equity.

“The timing is especially propitious as we approach a century of coeducation at the Law School in 2020. Naming professorships for our alumnae has been my dream throughout my deanship. Nancy has made my dream come true, and I am confident that others will follow where she has led.”

At the Law School, the profes­sorship will support scholarship in the legal, sociopolitical or his­torical aspects of democracy or equity in the United States.

“Supporting our faculty is one of my highest priorities,” Goluboff said. “Supporting their research into subjects that are crucial to our constitutional democracy will redound not only to the benefit of the Law School itself, but to our legal system and our society as a whole.”

Buc said she hopes the position will lead to greater knowledge and understanding of the forces that shape our law and our society — and even to change and reform.

“I always recall the legend on the Clark Hall portico — ‘That those alone may be servants of the law who labor with learning, courage, and devotion to pre­serve liberty and promote justice,’” Buc said, referring to words carved on the Law School’s former home and now emblazoned on Clay Hall. “I have tried to be that kind of lawyer, and I am proud to be establishing a professorship devoted to democracy and equity, words which add meaning and specificity to liberty and justice.”

Buc graduated from the Law School at a time when women were a tiny minority of the student population (she was one of seven in her class), and when some senior faculty and students resisted women’s attendance. She went on to a distinguished legal career focused on health care policy and government service, including stints as chief counsel for the U.S. Food and Drug Administration and at the Federal Trade Commission. She was the managing partner of the Washington, D.C. office of Weil, Gotshal & Manges before founding her own firm, Buc & Beardsley, which specialized in food and drug law.

Retired since 2011, Buc is a lifetime member of the Law School Dean’s Council and served on the Law School Foundation Board of Trustees and the Campaign Executive Committee for the school’s first capital campaign (1993-2000).

Founded in 1819, the University of Virginia School of Law is the second-oldest continuously operating law school in the nation. Consistently ranked among the top law schools, Virginia is a world-renowned training ground for distinguished lawyers and public servants, instilling in them a commitment to leadership, integrity and community service.