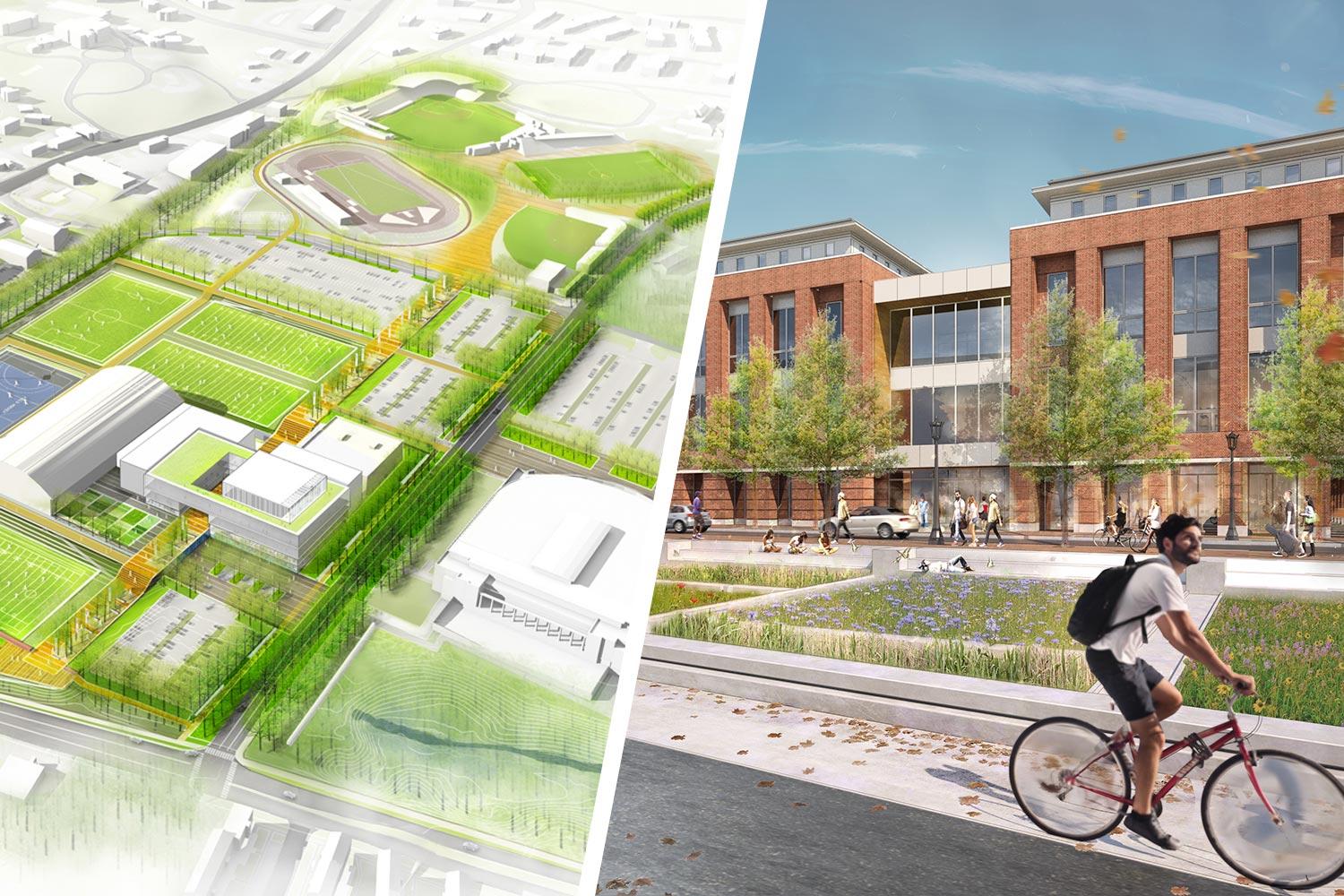 Over the next few years, athletics and student health facilities at the University of Virginia will undergo a dramatic transformation as UVA’s Athletics Master Plan takes shape and a new Student Health and Wellness Center opens on Brandon Avenue.

Both projects received a significant boost this week when Board of Visitors member Robert Hardie and his wife, Molly Hardie, announced a $7 million gift, with $6 million going to the Athletics Master Plan and $1 million to the new student health facility.

These new gifts are in addition to the $5.5 million in major gifts the Hardies already have given to the campaign to support various areas across the University, including the UVA Children’s Hospital and various research initiatives at the Medical Center, the Darden School of Business, the Jefferson Scholars Foundation, and several athletics facilities, including Davenport Field at Disharoon Park and John Paul Jones Arena.

“We are grateful and humbled to be able to support UVA, an institution that has had a profound impact on our lives and those of our children,” the Hardies said in a statement. “Our latest gifts are testaments to the leadership and vision of Carla Williams and Pat Lampkin, as well as Jim Ryan and his team. These projects are critical to the development and well-being of student-athletes and all students.”

“I thank Robert and Molly for their support of the vision for athletics and the Student Health and Wellness Center, which is much-needed and will make a difference for generations of students,” UVA President Jim Ryan said at this month’s Board of Visitors meeting, noting the Hardies’ long commitment to the University and many different initiatives.

Both of the Hardies are UVA alumni. Robert Hardie, co-chairman and CEO of H7 Holdings LLC and Level One Partners LLC in Charlottesville, earned a bachelor’s degree from the College of Arts & Sciences and an MBA and Ph.D. from the Darden School of Business. He also taught general management at Darden as an adjunct faculty member from 1999 to 2007.

He has served two terms on the Board of Visitors, appointed first by then-Gov. Tim Kaine in 2008 and again by former Gov. Terry McAuliffe in 2017.

Molly Hardie also co-chairs H7 Holdings and has served on numerous local boards, including the Thomas Jefferson Foundation and the UVA Health Foundation. A 2000 graduate of UVA’s School of Medicine, she has been an ardent supporter of the effort to build the UVA Children’s Hospital and Battle Building, as well as numerous health care initiatives, including cancer research.

Their latest gift will continue that legacy and help grow support for current and future student-athletes at UVA, according to UVA Athletic Director Carla Williams.

“Robert and Molly have supported our vision with their time, talent and resources since day one,” Williams said. “Their commitment to the University and UVA Athletics has been a constant source of encouragement to me, our coaches and our student-athletes. We need support for the Master Plan and I’m so thankful to both of them for helping us get closer to making the project a reality.”

The plan, estimated to cost $180 million, will be funded by private gifts like the Hardies’. The first phase was initiated last year with the demolition of University Hall, Onesty Hall and The Cage, clearing space for two grass practice fields for the football program. The Board of Visitors approved designs for those fields in its most recent meeting in September.

On the other side of Grounds, the Hardies’ gift will support a new Student Health and Wellness Center under construction on Brandon Avenue near the newly opened Julian Bond House student residence. The 156,000-square-foot building is expected to complete in 2021.

It will include spaces for general medicine, reproductive and gender-related health, Counseling and Psychological Services, Student Disability Access Services, Health Promotion and a retail pharmacy, as well as a traveler’s clinic designed to help students studying abroad get the immunizations and pre-travel information they need.

In addition to critically needed clinical space, the new building will provide space for wellness and preventative care, such as a teaching kitchen promoting nutrition and healthy eating, plus meditation spaces and spaces for student programs. A Student Health Advisory Committee was formed to collect student input for the center, to help ensure that it meets students’ needs.

“As students, Robert and Molly fully embraced the student experience at UVA,” Vice President and Chief Student Affairs Officer Patricia M. Lampkin said. “As alumni, they have continued to give back in ways that honor their experience and enlarge the opportunities for students who follow them. Their generous gift toward the Student Health & Wellness Center demonstrates their enduring, lifelong support of all that lies at the heart of the UVA student experience.”

Today's students, from all backgrounds, are tomorrow's leaders. With your support, our promising students gain a greater understanding of the world and live purposefully.

UVA promotes a healthy educational experience that helps students thrive, allowing them to succeed academically and throughout their lives. The Student Health & Wellness Center is a core component of the University’s efforts to offer the best possible student experience. The center will expand services to students to provide a more comprehensive approach to total wellness.