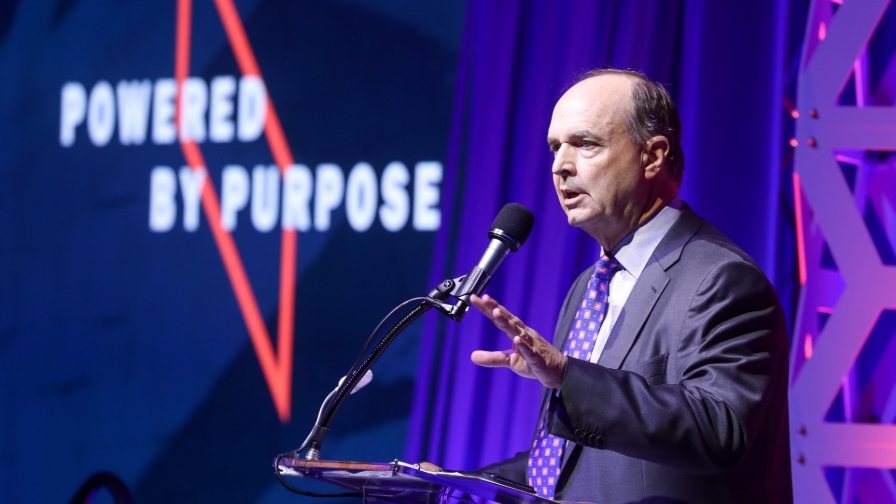 Posted on Darden School of Business | By Margaret Hancock

As the University of Virginia Darden School of Business launched the largest fundraising campaign in its history the weekend of 11–13 October, the School’s tight-knit community stood at the forefront of the kickoff events that highlighted their generous support and generated excitement over the momentum toward the campaign’s ambitious $400 million goal.

A special First Coffee kickoff event held the morning of 11 October on Darden Grounds brought hundreds together for the official launch of Darden’s Powered by Purpose campaign. First Coffee — a Darden tradition since the School’s founding — gathers students, staff and faculty members gather every morning for camaraderie and conversation. Friday’s First Coffee also included alumni and supporters of the School and the Darden School Foundation Board of Trustees, bringing together those who will benefit from the campaign with those who will improve their lives through support the campaign.

Dean Scott C. Beardsley welcomed attendees; expressed enthusiasm for the School’s opportunity to invest in the students, faculty and facilities that make Darden’s mission to improve the world possible; and shared his gratitude with those in attendance for their support, ending his comments with a heartfelt, “Thank you for being a part of the Darden family.”

Jim Cooper (MBA ’84), chair of the Powered by Purpose campaign, spoke to what the Darden community should know about Darden’s campaign, which is in support of the University of Virginia’s $5 billion Honor the Future campaign. Cooper said that, as UVA commemorates its 200 years and creates its vision for the future, Darden takes part by securing its future as a preeminent global business school.

Cooper did the honors of officially revealing the Powered by Purpose campaign goal of $400 million and the incredible progress toward that goal made during the silent phase of the campaign: $236 million, or 59 percent of the goal.

Cooper called the Darden community to action, asking for everyone’s participation in the campaign, whether it be serving as an ambassador or a donor at any level. He ended by addressing the Darden student body regarding philanthropy.

“We ask that upon graduation, all students give to the annual fund, in any amount, and make that a part of their regular giving,” he said.

The First Coffee kickoff event served as a showcase that the Powered by Purpose campaign is a significant moment in the Darden School’s history — a moment not just for a few philanthropists but for the entire Darden community.

Scholarship recipients, donors, faculty, and School leaders continued the celebration of the launch of the campaign and the power of philanthropy the evening of 11 October with a campaign gala in which Kara Ramirez Mullins, Darden’s vice president for advancement, announced the five newest inductees to the Principal Donors Society, Darden’s highest recognition of lifetime giving:

Cooper provided insight into his decision to join the campaign in a leadership capacity. He credited his gratitude for Darden and the many ways the School led him from a “boy in a small town” to a successful businessman.

“There is nothing in comparison to Darden, and I have found it very easy to give back,” Cooper said.

He credited Darden’s momentum as another reason for serving as chair of the campaign. “Darden is rising, and through this campaign, we can reach a destination even some in this audience might not have thought possible.”

The program included a video with remarks from Frank Sands Sr. (MBA ’63) who was unable to be in attendance, as he spoke about the joy of philanthropy through his recent $68 million gift to Darden.

As the crowd of alumni, students, faculty and friends enjoyed the performance by their fellow community members, the role Darden plays in creating lifelong connections was undeniable. Also undeniable was the sense that the official launch of the Powered by Purpose campaign will undoubtedly unite the community behind a vision to truly power the purposeful.